The Obama Administration has abruptly sealed court records containing alarming details of how Mexican drug smugglers murdered a U.S. Border patrol agent with a gun connected to a failed federal experiment that allowed firearms to be smuggled into Mexico.

This means information will now be kept from the public as well as the media. Could this be a cover-up on the part of the “most transparent” administration in history? After all, the rifle used to kill the federal agent (Brian Terry) last December in Arizona’s Peck Canyon was part of the now infamous Operation Fast and Furious. Conducted by the Bureau of Alcohol, Tobacco, Firearms and Explosives (ATF), the disastrous scheme allowed guns to be smuggled into Mexico so they could eventually be traced to drug cartels.

Instead, federal law enforcement officers lost track of more than 1,000 guns which have been used in numerous crimes. In Terry’s case, five illegal immigrants armed with at least two semi-automatic assault rifles were hunting for U.S. Border Patrol agents near a desert watering hole just north of the Arizona-Mexico border when a firefight erupted and Terry got hit.

We know this only because Washington D.C.’s conservative newspaper , the Washington Times, got ahold of the court documents before the government suddenly made them off limits. The now-sealed federal grand jury indictment tells the frightening story of how Terry was gunned down by Mexican drug smugglers patrolling the rugged desert with the intent to “intentionally and forcibly assault” Border Patrol agents.

You can see why the administration wants to keep this information from the public and the media, considering the smugglers were essentially armed by the U.S. government. Truth is, no one will know the reason for the confiscation of public court records in this case because the judge’s decision to seal it was also sealed, according to the news story. That means the public or media won’t have access to any new or old evidence, filings, rulings or arguments.

A number of high-ranking Border Patrol officials are questioning how the case is being handled. For instance, they wonder why the defendant (Manuel Osorio-Arellanes) hasn’t been tried even though it’s been almost a year since Terry’s murder. They also have concerns about the lack of transparency in the investigation, not to mention the recent sealing of the court case.

Osorio-Arellanes is charged with second-degree murder. The four other drug smugglers fled the scene and their names were blacked out in the indictment. In 2006 Osorio-Arellanes had been convicted in Phoenix of felony aggravated assault and in 2010 he was twice detained for being in the U.S. illegally.

During a Senate Judiciary Committee hearing this month to address the flawed gun-tracking program, Attorney General Eric Holder said it’s not fair to assume that mistakes in Operation Fast and Furious led to Terry’s death. Holder also expressed regret to the federal agent’s family, saying that he can only imagine their pain.

Thanks, Obama! 50% of Americans Worried They Can’t Afford Christmas This Year…

One in five Americans lost a sizeable amount of their disposable income during the recession, leaving them financially vulnerable and without many options.

The number of Americans considered ‘economically insecure’ reached a new high during the period from 2008 to 2010 which spanned what is now called the Great Recession.

This news comes just as businesses hope to increase profits amid holiday sales and Christmas shopping, but half of the U.S. population is now worried that they won’t be able to buy the presents on their list because of their financial situation.

Deemed economically insecure by the Economic Security Index, 20 per cent of the county have considerably less spending money now as compared to previous years.

By comparison, only 14.3 per cent of the country’s population was in the same position in 1986.

The report, compiled by Yale professor Jacob Hacker’s Index team, evaluates census data and looks at a family’s income, savings, and medical bills when determining who is considered economically insecure.

While the deals in stores and online on Black Friday and Cyber Monday are meant to encourage shoppers, many people’s bank statements are having the opposite effect.

As a result of the difficult financial times and the diminishing disposable cash in many American households, half of the country is concerned that they will not be able to buy the gifts they want for family and friends this holiday season.

A CBS poll reports that 33 per cent of those polled will not have enough money for holiday shopping.

The poll also asked respondents to describe how concerned they were about meeting their spending needs this season- asking them to self-identify as very concerned, somewhat concerned, not very concerned, or not at all concerned.

The categories were split relatively evenly- all ranging between 21 and 29 per cent.

Home prices across the nation are now right back where they were at the beginning of 2003. All that was gained is largely now lost, and the effect on home ownership could continue for decades.

“Consumer attitudes have gotten a lot more negative about long-term commitment,” said Standard and Poors’ David Blitzer, after reporting home prices through September had fallen a deeper-than-expected 3.9 percent compared to the third quarter of 2010.

“They dropped to new lows. This takes them below the point we saw in 2009, where briefly we all thought this thing was about to turn around.”

And that’s the problem.

Every time we think things are turning around in the housing market, we get hit with some new problem, like last year’s so-called “robo-signing” foreclosure paperwork scandal, which managed to stall the cleansing of distress in the market for over a year. Now that foreclosures are ramping up again, prices are coming down again.

All this could push home ownership down to levels not seen at least since before the Census began tracking this data in 1963. Home ownership soared to 70 percent in 2005, but it could fall to 62 percent by 2015, according to the number crunchers at John Burns Real Estate Consulting.

They suggest that the effect of foreclosures drops home ownership 5.6 percent, and cyclical trends, like poor consumer confidence, tightening mortgage credit and the weak economy drop it 3 percent. Positive demographic trends would only offset that by 0.7 percent.

Obama’s Job Approval Rating Drops Below Jimmy Carter’s (Is It Any Wonder Why?)

Back in 1979, Carter was far below Obama until the Iran hostage crisis, eerily being duplicated in Tehran today with Iranian protesters storming the British embassy. The early days of the crisis helped Carter’s ratings, though his failure to win the release of captured Americans, coupled with a bad economy, led to his defeat by Ronald Reagan in 1980.

What’s more, Gallup finds that Obama’s overall job approval rating so far has averaged 49 percent. Only three former presidents have had a worse average rating at this stage: Carter, Ford, and Harry S. Truman. Only Truman won re-election in an anti-Congress campaign that Obama’s team is using as a model.

Obama Bows to Environmentalists; Says “No!” to New Energy Production, Putting Off Creation of 204,500 New Jobs

President Obama’s United States Department of Agriculture has delayed shale gas drilling in Ohio for up to six months by cancelling a mineral lease auction for Wayne National Forest (WNF). The move was taken in deference to environmentalists, on the pretext of studying the effects of hydraulic fracturing.

“Conditions have changed since the 2006 Forest Plan was developed,” announced WNF Supervisor Anne Carey on Tuesday. “The technology used in the Utica & Marcellus Shale formations need to be studied to see if potential effects to the surface are significantly different than those identified in the Forest Plan.”

The study will take up to six months to complete. The WNF study reportedly “will focus solely on how it could affect forest land,” despite the significance of hydraulic fracturing to united proponents of the delay, “and not how it could affect groundwater.”

Speaking of the WNF gas drilling, one environmentalist group spokesman suggested that moving forward with drilling “could turn the Ohio Valley into Ozone Alley,” even though Wayne National Forest already has nearly 1300 oil and gas wells in operation which this study does not affect.

The Ohio Oil and Gas Energy Education Program (OOGEEP) recently estimated that drilling in the Utica shale, which is affected by the suspension of the mineral lease auctions, would produce up 204,500 jobs by 2015.

This means your unborn children and grandchildren are indebted for as far as the eye can see into the future, and beyond.

This is economic slavery, folks, pure and simple.  Future generations of Americans who are not even born yet will have to pay off this debt.

There is no legal right, moral right or Constitutional right to indebt people who have yet to be born.  Even under contractual law, you cannot indebt someone who is under the age of consent.

Yet that’s exactly what’s being done.

And it will only stop when YOU put a stop to it.

Obama: I Am the Dream 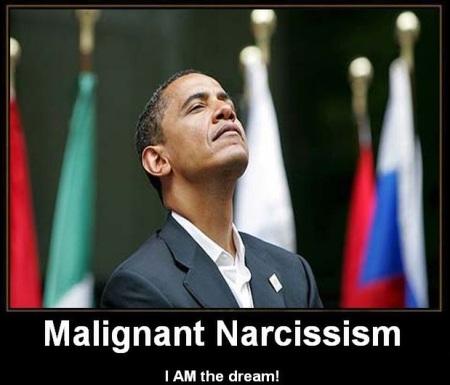 Uncategorized | Tagged: i am the dream, narcissism, obama |

The Stuttering Messiah
Blog at WordPress.com.