Obama-messiah: Winning the Nobel Peace Prize for an Unkept Promise 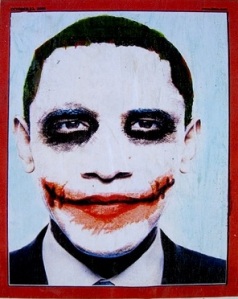 So Obama-messiah has won the Nobel Peace Prize for 2009.

Not for bringing peace to any nation, region or even a single person. But for merely promising to do so.

Could you imagine if the Nobel Prize in medicine was awarded to an individual who merely promised to find a cure for cancer, but never did?

Or the Nobel Prize in science being awarded to an individual who merely promised to make a car that ran on water, but never did?

Now that the Nobel committee is giving out prizes for mere promises, I could get rich.

Maybe I could win the Nobel Prize in chemistry for promising to make a nasal spray that snaps people out of the opiate-like hypnotic state they’re in over this idiotic presidency.

From the very start conservatives complained that Obama-messiah was all show and no substance. “Give him a chance!” the liberals whined in response.

This lame and ill-conceived award proves beyond any shadow of a doubt that the Obama-messiah doesn’t actually need to do anything. He only needs to promise, and it is accounted unto him as being done.  Kinda like God.  Only without the great track record.

Just ask any of our brave troops in Iraq or Afghanistan.

Let’s take a look at the president’s first 12 days in the White House according to his public schedule to see what he did to deserve a Nobel Peace Prize.

Editor’s Note: Although President Obama had only been in office for only 12 days before the nominations for this year’s Nobel Peace prize closed, the entire process actually takes a full year. According to the official Nobel Prize Web site invitation letters are sent out in September. Every year, the Norwegian Nobel Committee sends out thousands of letters inviting a qualified and select number of people to submit their nominations for the Nobel Peace Prize. The deadline to submit nominations is February 1. — Two hundred five names were submitted for the 2009 Nobel Peace Prize, 33 of which are organizations. A short list of nominees is prepared in February and March. The short list is subject to adviser review from March until August. At the beginning of October, the Nobel Committee chooses the Nobel Peace Prize Laureates through a majority vote. The decision is final and without appeal. The names of the Nobel Peace Prize Laureates are then announced.”

Barack Obama won the Nobel Peace Prize this morning. Over the last decade the only requirement to win the prize was that the nominee had to be critical of George W. Bush (see Al Gore, Mohamed El Baradei and Jimmy Carter).

Let’s take a look at the president’s first 12 days in the White House according to his public schedule to see what he did to deserve a Nobel Peace Prize:

January 20: Sworn in as president. Went to a parade. Partied.

January 23: Ordered the release of federal funding to pay for abortions in foreign countries. Lunch with Joe Biden; met with Tim Geithner.

January 27: Met with Republicans. Spoke at a clock tower in Ohio.

January 28: Economic meetings in the morning, met with Defense secretary in the afternoon.

So there you have it. The short path to the Nobel Peace Prize: Party, go to meetings, skip church, release federal funding to pay for abortions in foreign countries, party some more.