The Most Profound Victims of the Obama Hoax

“A sense of disappointment, bordering on betrayal, has been growing across the country, especially in moderate states like Indiana, where people now openly say they didn’t quite understand the President they voted for in 2008.”

The most profound victims of the Obama hoax are poor, young, unemployed blacks who want jobs. They’re suffering the most from Obama’s economic policies, designed more to disembowel the U.S. economy than restore it. They got change, but not the hope they believed went with it.

Michael Scherer’s recent TIME article features Indiana voters who supported Obama: a laid-off payroll administrator with 23 years at an RV plant, a South Bend orthopedic surgeon who’s unhappy with ObamaCare, a disaffected “Democratic strategist” working on the midterm elections. The tone of the TIME article leads one to expect there’d be an 800 number given to donate to the individual recovery funds of the featured disaffected Obama supporters.

But what about the poor, young blacks who reached for the Kool-Aid enthusiastically, clasping its cup with both hands, gulping down the elixir of hope and change hard and fast? What’s become of them? How are their new Green Jobs working out? Where are the success stories featuring their newfound careers in those shovel-ready projects that awaited only passage of the stimulus bill? A shovel was at work, all right, but it wasn’t throwing earth dirt.

Summer job opportunities for all youth have declined. Teen unemployment is at an all-time high at 26.1% in July. But for those voters who most overwhelmingly supported Barack Obama, the employment figures are particularly dismal.

Unemployment among Black teens ages 16 to 19 — while “extremely volatile from month to month,” states the [August 2010, U.S. Bureau of Labor Statistics] report — has been steadily increasing throughout the summer. In July, their jobless rate stood at 40.6 percent, up from 39.9 percent in June and 38 percent in May, compared with white rates of 28.7 percent (July), 23.2 percent (June) and 24.4 percent (May).

Teens by gender: In July, both Black men and women saw a slight increase in joblessness. Unemployment for Black male teens remains the highest at 43.7 percent, up from 43.2 percent in June. Black female teen unemployment rose from 36.5 percent in June to 37.1 percent in July.

So what will become of the misguided confidence that poor, young blacks put in the Obama Hoax that promised the chalice of hope and change only to serve up the dregs of an economy trending toward negative GDP growth in early 2011? Will their Great Awakening, if it comes, lead to enlightenment, or to an even deeper cynicism?

Read the rest of the article, here:  http://www.americanthinker.com/2010/09/the_most_profound_victims_of_t.html

Thank You, Obama…1 in Every 6 Americans Now on Government Aid, and the Number Is Growing By Leaps and Bounds! 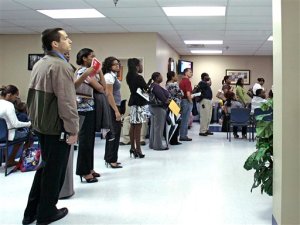 Close to 10 million receive unemployment insurance, nearly four times the number from 2007. Benefits have been extended by Congress eight times beyond the basic 26-week program.

WASHINGTON — Government anti-poverty programs that have grown to meet the needs of recession victims now serve a record one in six Americans and are continuing to expand.

More than 50 million Americans are on Medicaid, the federal-state program aimed principally at the poor, a survey of state data by USA TODAY shows. That’s up at least 17% since the recession began in December 2007.

“Virtually every Medicaid director in the country would say that their current enrollment is the highest on record,” says Vernon Smith of Health Management Associates, which surveys states for Kaiser Family Foundation.

The program has grown even before the new health care law adds about 16 million people, beginning in 2014. That has strained doctors. “Private physicians are already indicating that they’re at their limit,” says Dan Hawkins of the National Association of Community Health Centers.

More than 40 million people get food stamps, an increase of nearly 50% during the economic downturn, according to government data through May. The program has grown steadily for three years.

Largest plunge in retail sales on record, in spite of Obama “stimulus”…

WASHINGTON (AP) — Retail sales plunged in December as demand for autos, clothing and appliances all slipped, a disappointing finish to a year in which sales had the largest drop on record.

The weakness in consumer demand highlighted the formidable hurdles facing the economy as it struggles to recover from the deepest recession in seven decades.

For the year, sales fell 6.2 percent, the biggest decline on records that go back to 1992. The only other year that annual sales fell was in 2008, when they slipped by 0.5 percent.

WASHINGTON (AP) — Retail sales unexpectedly fell in December, leaving 2009 with the biggest yearly drop on record and highlighting the formidable hurdles facing the economy as it struggles to recover from the deepest recession in seven decades.

For the year, sales fell 6.2 percent, the biggest decline on government records that go back to 1992. The only other year that annual sales fell was in 2008, when they slipped by 0.5 percent.

In the jobs report, the Labor Department said new claims for unemployment insurance rose by 11,000 to a seasonally adjusted 444,000. Wall Street economists polled by Thomson Reuters expected an increase of only 3,000.

The ‘Real’ Jobless Rate: 17.5% Of Workers Are Unemployed
http://www.cnbc.com/id/34040009
Published: Thursday, 19 Nov 2009 | 4:55 PM ET
As experts debate the potential speed of the US recovery, one figure looms large but is often overlooked: nearly 1 in 5 Americans is either out of work or under-employed.

According to the government’s broadest measure of unemployment, some 17.5 percent are either without a job entirely or underemployed. The so-called U-6 number is at the highest rate since becoming an official labor statistic in 1994.

The number dwarfs the statistic most people pay attention to—the U-3 rate—which most recently showed unemployment at 10.2 percent for October, the highest it has been since June 1983.

The difference is that what is traditionally referred to as the “unemployment rate” only measures those out of work who are still looking for jobs. Discouraged workers who have quit trying to find a job, as well as those working part-time but looking for full-time work or who are otherwise underemployed, count in the U-6 rate.

With such a large portion of Americans experiencing employment struggles, economists worry that an extended period of slow or flat growth lies ahead.

“To me there’s no easy solution here,” says Michael Pento, chief economist at Delta Global Advisors. “Unless you create another bubble in which the economy can create jobs, then you’re not going to have growth. That’s the sad truth.”

Pento warns that forecasts of a double-dip (“W”) or a straight up (“V”) recovery both could be too optimistic given the jobs situation.

Instead, he believes the economy could flatline (or “L”) for an extended period as small businesses struggle to grow and consequently rehire the workers that have been furloughed as the U-3 unemployment rate has doubled since March 2008.

Even as the Obama-messiah’s economic team touts so-called “economic green shoots” as evidence that America is emerging from recession, the government’s own figures tell a contradictory story as unemployment continues to soar.

In February, Obama signed a $787 billion stimulus bill while promising that the unemployment rate would not surpass 8% if the stimulus bill was passed.  He promised America the stimulus package would result in “a new wave of innovation, activity and construction” that would be “unleashed all across America.”

Obama also promised the stimulus would “save or create up to four million jobs.”

Vice President Joe Biden said the massive federal spending plan would “drop-kick” the economy out of the recession.

In other words, far from saving the economy, Obama’s stimulus plan is instead sinking the economy.  There are now 3 million fewer American workers working than what Obama promised.

WASHINGTON (Reuters) – U.S. employers cut a deeper-than-expected 263,000 jobs in September, lifting the unemployment rate to 9.8 percent, according to a government report on Friday that fueled fears the weak labor market could undermine economic recovery.

The Labor Department said the unemployment rate was the highest since June 1983 and payrolls had now dropped for 21 consecutive months.

Analysts polled by Reuters had expected non-farm payrolls to drop 180,000 in September and the unemployment rate to rise to 9.8 percent from 9.7 percent the prior month. The poll was conducted before reports, including regional manufacturing surveys, showed some deterioration in employment measures.

The government revised job losses for July and August to show 13,000 more jobs lost than previously reported. Preliminary annual benchmark revisions, released together with September’s employment report showed that total non-farm payroll employment for March would have to be revised down about 824,000.

Stubbornly high unemployment is viewed as the missing link in the economy’s recovery from its worst recession in 70 years.